The Link Between Eating Disorders and Body Dysmorphic Disorder 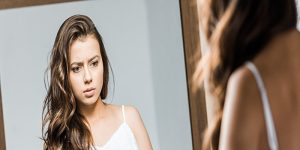 Many people who suffer from an eating disorder are intensely anxious about their appearance. But in some cases, it’s not just the eating disorder that’s contributing to these troubling thoughts.

Eating disorders often coexist with body dysmorphic disorder, a mental health condition that causes a person to become overwhelmed by thoughts or feelings about their looks.

Researchers from Anglia Ruskin University surveyed more than 1,600 health club members in the U.K. and found that the people who reported having an eating disorder were 12 times more likely to struggle with obsessive thoughts about perceived flaws in their appearance.

There’s no doubt that living with an eating disorder can cause serious body image concerns. Body dysmorphic disorder can amplify those concerns by making it even harder to control obsessive thoughts about your appearance. When a person suffers from both disorders, it can lead to devastating — and even fatal — consequences if left untreated.

We’ve all had days when we’re sure that everyone is judging us for that blemish or a hair that’s out of place. But people who suffer from body dysmorphic disorder can’t stop fixating on those anxieties, and they spend hours trying to hide what they perceive as unforgivable flaws.

“Body [dysmorphic disorder] can result in anxiety, stress, and reduced quality of life,” said Mike Trott, Ph.D., a researcher at Anglia Ruskin University and the lead author of the study. “While sufferers of eating disorders, such as anorexia and bulimia nervosa, share similar traits to those with body [dysmorphic disorder], research into any correlation between the two is sparse.”

Someone who is struggling with body dysmorphic disorder feels overwhelmed by invasive thoughts and feelings about their appearance. They may have a distorted view of themselves that makes them believe that they are ugly or deformed, so they try to “fix” the way they look through clothing, makeup, or diet and exercise. They may also feel intense shame about their appearance when they are around others, so they may stop going to school, showing up at work, or attending social gatherings.

The Importance of Holistic Treatment

Because it’s possible to struggle with both an eating disorder and body dysmorphic disorder, some symptoms of these conditions can overlap. That’s why it’s crucial to get a comprehensive assessment to determine how these disorders have been affecting your daily life.

By seeking holistic treatment that addresses both conditions, you can build a healthier relationship with your body. Your treatment team can develop a plan of care that includes personalized interventions that address your specific body image concerns.

When you’re struggling with both conditions, you might want nothing more than to hide from the world. But with appropriate treatment, you can find hope for a future in which you can appreciate yourself and your body exactly as it is.